141st ANNUAL GENERAL MEETING OF THE RINGWOOD AND BURLEY BAND 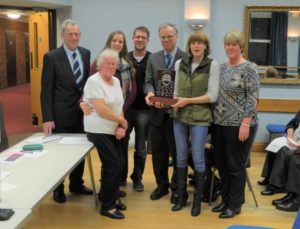 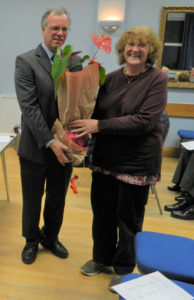 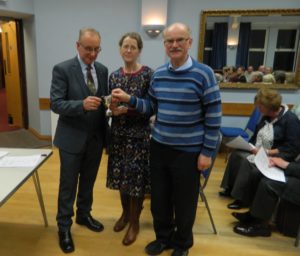 The Lister cup awarded to Ruth and Tim Moorhouse 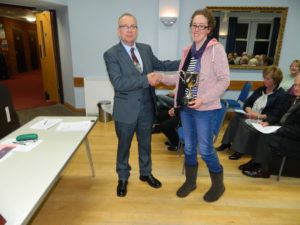 The Chairman Tony Mist welcomed the Vice-Presidents, members of the band and supporters to the Ringwood and Burley Bands 141st Annual General Meeting in the Ebenezer Hall at Greyfriars on Friday February 28th, he thanked people present for turning out on such a wet and windy evening.

The meeting opened with six obituaries of people connected to the band who had passed away during the past year and the Chairman asked for a moments silence to remember them all.

The next items were the Apologies, then the minutes from the last AGM and matters arising were dealt with also correspondence.

This was followed by a report from The Treasurer Vernon Riordan, he thanked members for their support, he noted that our income was slightly down from the previous year mainly due to playing a few less engagements, he also said that many or our costs had risen particularly the increase of our insurance for instruments and equipment, he thanked Kevin Legg for the comprehensive inventory he had taken recently of the bands instruments and equipment.

Tony Mist gave a report on the supporters club and thanked his wife Margaret for all the work she does raising funds which are used to help in the running of the band, Margaret runs a weekly draw for members which raises a good sum to help in various projects he also thanked Wendy Tuffen for the assistance she gives during the course of the year.

The Officers for the coming year were elected, President/Chairman Tony Mist; Vice-Chairman Kevin Legg; Treasurer Vernon Riordan; Secretary Cliff Brock assisted by Wilma; Trustees Kevin Legg and John Hayward; Committee John Thornton, (it was noted that we needed three more persons to join the committee and the Chairman asked for volunteers for these positions).

Trustee Kevin Legg gave a comprehensive report on the inventory he had taken on the instruments and equipment owned by the band, he made the point that our properties had been very much undervalued for insurance purposes and that for the coming year the valuation was £105,000 which will raise our premium considerably.

Clive Burroughs who is a member of the cornet section has been appointed Deputy Conductor to assist Lloyd Rayner, Clive is an experienced and former military musician and will be a great asset to the band,

The Musical Director Lloyd Rayner presented his report, he said it had been a reasonably successful year, but we had given less performances, the playing membership had been good and he thanked members for their support, he felt that the band was making good progress but felt their was room for further improvement, the formation of the training band was becoming successful with a number of young people attending and also some older members returning to playing after some time, he thanked members who had given up their time to assist the training band.

Presentations of the various yearly awards were made, The Frank Pope trophy was awarded to Julia Brown, The Bernard Lawson trophy to the Mist family and the Lister Trophy to Ruth and Tim Moorhouse.

The Chairman in his address thanked the band for all the hard work that had been put in during a challenging year and hoped that the band would continue to keep the family spirit of the band.